This section was created because of a material via Stage 32: @Stage32, and they were found because @RBwalksintoabar followed Gharr.

Already followed Stage 32, because of actors that Gharr interacts with (mostly through Re-Tweets), or promotes… but Stage 32 was brought into sharp focus when Richard RB Botto (re-followed?) followed me. The video “🎥 Ex Machina — The Control of Information” really made a solid creative connection, and this article resulted as a memento of that occasion.

Please note: the below picture does not link to a video!!! 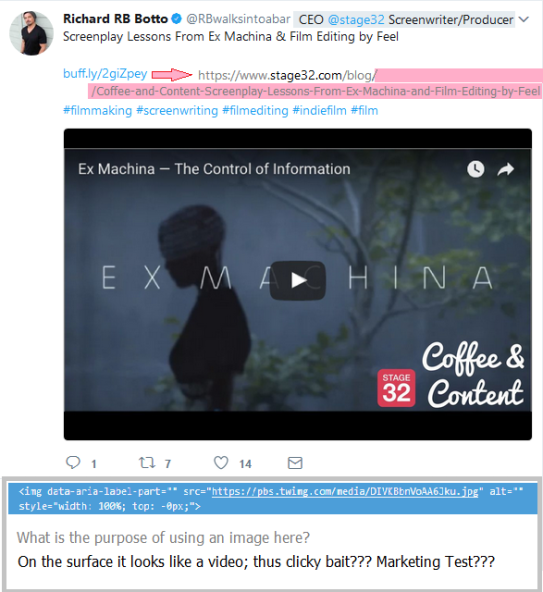 When you click on the image that seems to be a video you get an enlarged picture, which in marketing terms means the user starts to mistrust the source, as it seems to be parading around as a standard video.

The best guess here is that Richard RB Botto is just one of those people that likes to use automated systems a lot, and likes to get lots of marketing information on who is interested in his stuff. It may follow that Richard RB Botto has made contact with Gharr because of an automated search algorithms. The #Transhumans certainly feel that an algorithm or AI representation of themselves is needed to sift for information of interest because of the sheer amount of data that is generated every second. For Gharr’s part, a reference to an actor, voice actor, fashion re-tweet; music reference; or a pattern of tweets, and stuff produced here (bladerunner mentions for example), might have been enough for the automations, and algorithms that  Richard RB Botto uses: to trigger a flag for Gharr as something that might be of interest—the result being a seemingly very personal response of a follow by Richard RB Botto’s twitter account.

The above notice is very common for a number of music producers that Gharr follows, so the notice from twitter by Richard RB Botto, or the automated systems he manages, is normally so common, it would not rate a mention…

In my imagination the agreement would work like this:

As for Gharr’s interest in Richard RB Botto: he’s probably more of a puzzle for marketing, and brand creation—observing Richard RB Botto may give some valuable insights into into the business practices of creating an image, and making contact with large numbers of people. So far Gharr has not automated to the level that may be common on twitter, but that does not mean automation practices can not be done in a much slower way by a human.

The above might be of interest to actors, and promoters that want to get noticed by Richard RB Botto, he also provided a really interesting reference on making movies for directors and screen writers. As shown above, Richard RB Botto’s blog, or perhaps the correct name is stage32’s blog has a very interesting vlog/tutorial on how to make movies by @michaeltuckerla that is well worth watching…

Ex Machina — The Control of Information

The video make some really nice points on whose point of view the story is based on.

In story terms the first person narrative, or the audience only seeing what the character see and learns.

The Omniscient method mentioned in the video is drifting between characters, being able to see things from many perspectives

Omniscient can also imply that the story is known, or in the case of the directors script, the story is fully explained. Called screenplay (perhaps the official name), the script for the movie is cut back (only a part of a scene of a screenplay) is left in to give the audience not the full explanation of what is going on, but only the relevant details, and the rest of the details are left out till the audience needs them (if ever).

It would seem that the director must be focused on what the story is about (the full story, and details are all revealed, and spelt out), but then keeps another focus what information the audience is given, and thus gives us the so called dot (or outline, summary), that allows us to connect the dots between scenes. Only when the audience can’t make the connections, are more parts of a scene revealed. That means teasing, or promising the audience that more dots are to come—and this is the essence of the information control the director has power of once he/she is given a script. This also cuts back on the time a movie runs for, and reduces costs, while the director tries to give the full story of the movie to us. In terms of writing a document, it is the notes (that are much shorter) from a lecture, that cover all the facts. Notes are shorter in length, but are produced in a highly accurate format—the student creating just enough dots to enable them to recreate what full and relevant information that was given to them from the lecturer (the accuracy from the notes that is aimed for).

In another spin on the concept of summaries: it could be an advantage for a summary to be interpreted in several ways: ☆ 2001 A Space Odyssey: A myth should have all sorts of levels, and interpretations—even with the meanings of the myth, & the monolith.

Another part of the audience not being Omniscient is for the audience to know everything, the character of plot must develop, things are learned by the audience at an increasing rate to build suspense, and a sense of excitement. Sometimes the plot is simply the character changing, and becoming a different person—from the character that was introduced to us. In other plots the development is for entire galactic civilizations.

The audience lacking Omniscient ability—to know it all—also effects the choice of character, in Ex Machina, the wrong choice would seem to be the character that knew it all (or inventor that thought that they did), or a character that does very few things, other then stay in their room for example.

Perhaps fate does play a part, as “memento” happens to be a movie that @michaeltuckerla reviews. He also suggests that we check out videos by Wisecrack.

Already seen one of Wisecracks video reviews in the past, and yes they are interesting to watch. Here is a review of Memento that you might like.

The Material below this point may, or may not be supported by the article, author, or any of those people or organizations that may be mentioned in the above article.

In single article view: this article does have an associated “Leave a Reply” and “Enter your comment here…” comment box below this point. You should get used to where this comment box is located before you try to leave a comment for this article.

Thank you for taking an interest in this WordPress page.