A recent discovery has resulted in Eris being found to be smaller than Pluto[1].

Here is What Wikipedia has to say about Pluto: “Pluto, formal designation is 134340 Pluto. Pluto’s size has been under debate since the discovery of Eris.

Pluto is now the largest dwarf planet in the Kuiper Belt (a part of our Solar System) followed by Eris [1].

The largest dwarf planet in our solar system is Ceres which also happens to be the largest asteroid, and protoplanet. Ceres orbits inside the asteroid belt.

“I give my rebuttal, Pluto is a planet:” 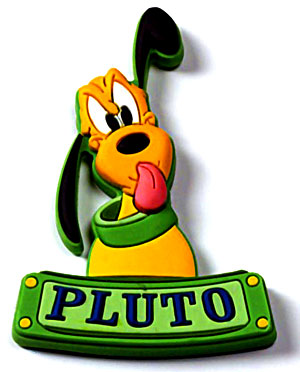 Pluto is not happy with being sent to the dog house!

IAU sends Pluto to the dog house: On August 24, 2006, the International Astronomical Union (IAU) defined what it means to be a “planet” within the Solar System. definition excluded Pluto as a planet and added it as a member of the new category “dwarf planet” along with Eris and Ceres.

A number of scientists continue to hold that Pluto should be classified as a planet.

Pluto has five moons: Charon (the largest, with a diameter just over half that of Pluto), Nix, Hydra, Kerberos, and Styx.

The moons Kerberos and Styx were only discovered in 2011–2012. A spacecraft will be flying by Pluto in 2015 and that might result in rings or debris system being found around the dwarf planet as meteoroids that strike those satellites (moons).

New Horizons spacecraft will make a close flyby of Pluto at a height of only 10, 000 km from its surface (on earth that would be close enough to see individual buildings).

Shortened link to this post: Pluto, The Planet (not dwarf planet):” http://bit.ly/aJpU8T

Material below this point may or may not be supported by the article, author, or any of those people or organizations that may be mentioned in the above article.

In single article view: this article does have an associated “Leave a Reply” and “Enter your comment here…” comment box below this point. You should get used to where this comment box is located before you try to leave a comment for this article.

This entry was posted in Space and tagged Space. Bookmark the permalink.